The 49th national meeting of the CMP took place in Ottawa this week.  A total of 537 delegates attended from 11 countries.  The plenary was entitled “The Need to Innovate: Celebrate the Past…Look to the Future”.  Day 1 was spent on comminution; day 2 on flotation; and day 3 on gold and some innovations.  In my view this was the strongest technical programme that I have seen at the CMP in five years.

An interesting paper on reducing the dilution of spodumene concentrate with iron silicates by magnetic separation was presented by Dr. Charlotte Gibson, of SGS Canada. She is shown in the photo below.

A development in vibrating screen design at operations scale was reported by Ed Wipf, of EdRockMan IV, in which particularly the problem of classifying SAG mill discharge at a high tonnage has become a key problem because of wear and temporal overload situations.  The new design is called Two-Mass Screens, and has rearranged the screen into a double-deck driven by a different mechanism. The campaign life of the screen has been considerably extended as a result of this different design.  He is shown in the photo below. 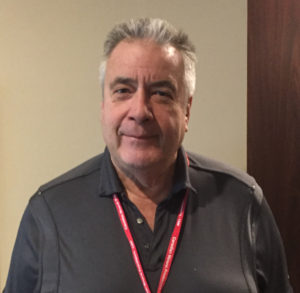 A remarkable project on improving the flow of mill feed through a storage bin by testing and modelling the physical properties of the rock was presented by Tracy Holmes of Jenike and Johnson.  The case study was at the Kittila Mine in northern Finland, where ratholing, bridging and freezing limit the free flow of ore to the mill.  The modelling work led to a redesign of the bin with successful outcomes.  Tracy is shown in the photo below. 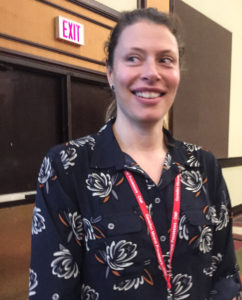 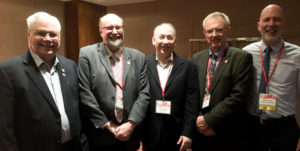 An interesting and worthwhile paper on the sustainable stabilisation of arsenic was presented by Gabriel Garcia Curiel, of Dundee Sustainable Technologies.  Traditionally arsenic has been stabilised  by a hydrometallurgical process, however in this work a different approach using vitrification and then set in glass.  In this form there is no release of arsenic to the environment.

GoldCorp’s Simon Hille presented an update on their Peñasquito project in Mexico, where a brownfield expansion is adding a pyrite float to the final tailings of the main lead and zinc circuit to recover gold in a concentrate that undergoes an extractive process to refine the gold to bullion.  These days, more and more of this refractory hosting of gold is developing, and we expect to see flotation becoming a more significant unit recovery process for this metal. 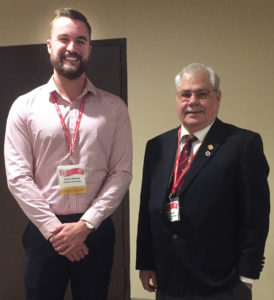 Dr Jing Li, Chief Mineralogist at Zijin Mining, Xiamen, China, also attended the conference.  Below is a photo of her with Norm. 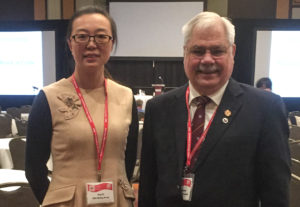 In the upcoming 50th meeting of the CMP, to be held in Ottawa in January 2018, the theme will be:

Day One: The Past

The organising committee of the CMP and contributing authors are to be congratulated on a fine performance this year.  The balance of academic and operational research and projects was just right, and the overall quality of papers was excellent.